So, what the hell, Sew Busty can be about bra making for a month.

(Don’t you garment-makers worry, though! Sew Busty will still mostly be about garments. Join us for bra month for a fun challenge, but then circle back with us next month, when we’ll be making a dress.)

What can I expect from bra month?

FANTASTIC QUESTION. And, lemme tell ya, I’ve got a HUGE MONTH planned for y’all. Here’s what to expect:

ARE YOU READY YET?

No? Okay, how about I tell you about what I wish I would have known when I started making my own bras?

I was a HUGE bra fit addict. I spent so much time reading all the resources on the A Bra That Fits subreddit, following lingerie influencers, and lurking on Bratabase. I had heard the statistic that something like 80% of bra-wearing people wear the wrong size, and that this percentage only gets worse for the more big-boobed among us. But I thought I had it figured out!

Well, turns out, my bra was the right size, but the wrong fit.

2. boobs come in all shapes (and sizes).

This goes along with #1 – but, before I started making my own bras, I didn’t fully realize to what extend boobs come in different shapes. I knew the lingo – projection, root height, root width, fullness, close set, wide set … but I hadn’t ever really become intimate with these concepts.

As I’ve discussed on Insta before, I was wearing the wrong wire. I’m what we call narrow-rooted and projected in shape, concepts Madison Alexandra explains in this fantastic TikTok video:

In fact, I’m so narrow-rooted that no bra maker makes a bra with the correct volume cup and the correct wire. Not even Polish bra designer Ewa Michalak, who is known for her narrow wires. So, my bras not fitting wasn’t really my fault, but it was much more of a problem than I ever realized.

I’ll be doing a whole post on boob shape later this month, so I’ll leave it at that for now. But, please trust me, your bra probably doesn’t fit.

3. Make a structured bralette or simple wireless bra first. (YES YOU CAN WEAR A BRALETTE!)

There’s a reason I’ve chosen the Jet Set Natural as our sew along this month: Because I believe it’s often a good idea to start one’s bra making journey with a bralette. Why? A few reasons:

First, as I mentioned, you’re probably wearing the wrong bra, and it’s pretty likely that you’re less familiar with your breast shape than you think. For me, I knew I was somewhat narrow-rooted, but I had no idea the extent to it. Making a bra is an experience in getting really intimate with your own body, and a bralette allows you to do that with a bit more simplicity. By making a bralette, you’ll learn all about your breast shape, which will help you when you go to make a more elaborate bra.

Second, a bralette or simple wireless bra is an easier fit. It’s more likely that, on your first or second try, you’ll end up with something comfy and wearable. Wired bras and more complex wireless bras usually require more fiddling to get to a comfy place. I want you to have fun and avoid frustration, and a bralette is a great way to do that.

Third, bralettes and simple wireless bras tend to have fewer parts and fewer seams, which means they go together more quickly. I’m a slow sewist, and it only took me about 4 hours to make my Jet Set bra. A wired bra takes me about 8 hours.

Now, I want to note that some expert bra makers disagree with this advice, and that’s okay. They tend to point out that you should make the type of bra you want to wear, and I don’t think that’s a crazy point. Some of this depends on learning styles. I’m a methodical, walk-before-you-run type of gal. Others prefer to jump in the deep end. So, pick your poison!

Okay, I don’t want to discourage you, but let me tell you about my first me-made bra. It was many, many sizes too small. MANY.

I sent it to a nice teen who needed new bras, and they apparently really liked it. But, on me, it was just all wrong.

This has to do with a few things – figuring out your measurements without having a perfectly-fitting bra, learning how to take those measurements, and just variability in how patterns fit different people.

Now, I will say that the Jet Set Natural is the first bra I’ve ever made that fit on the first try, and that’s part of why I chose it for our sew along. I’m hoping others will also get a perfect fit on their first try! But, don’t use your fanciest, most expensive fabric for your first bra. Save that for your second or third. And don’t get discouraged if your first bra isn’t perfect.

SO ADDICTING. I got to the point that I needed to force myself to make more garments because I had like 8 bras and no shirts that fit. 😂 I hope you’ll love it as much as I do!

Don’t forget to join the Bra Month Challenge for your chance to win some Sew Busty swag! Make a bra, bralette, or binder and post a pic of your make (flat lays are totally okay; no need to model!) on Instagram, in the Sew Busty Subreddit, and/or in the Sew Busty Facebook Group with #sewbustychallenge at any time before July 5! 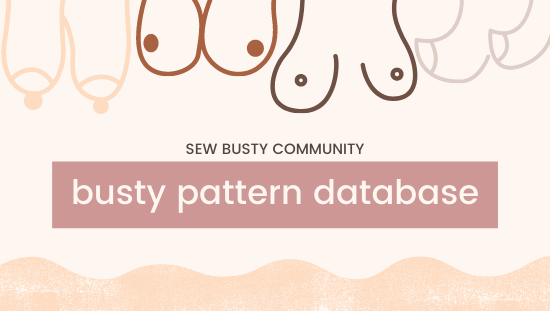 As promised, a post all about my Christmas dress!
Life update!
Some holidays call for simplicity — like throwing on your favorite tank (the @tillybuttons Agnes maternity tee, tweaked including a giant FBA) and some Minnie ears and calling it a day!
Styling this cowl neck top today with my favorite RTW polka dot pants 🤩
Here I am, 17 days postpartum, super tired, no makeup, but *rocking* this cowl neck top! 🤱
I'm BAAAACK, y'all 👋 , and I'm here with a new GIANT full bust adjustment tutorial, this time on a cowl neckline.